The Real Meaning of Labor Day 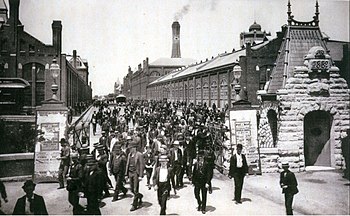 Ah, Labor Day. A day to rest and reflect on the contributions of the American worker. A day to BBQ and spend time with family. A day to, um, labor?

That's right, folks. Contrary to popular belief, Labor Day is not a day of rest. It's a day to celebrate how far we've come as a country...by continuing to work.

The History of Labor Day

Labor Day has its roots in the labor union movement of the late 19th century. At that time, working conditions in America were deplorable. People worked long hours for little pay and no benefits. There were no laws governing things like minimum wage or child labor. Workers who spoke up or tried to organize were often met with violence from their employers. In 1894, tensions arose when workers at the Pullman Palace Car Company in Chicago went on strike to protest a pay cut. The strike quickly escalated, and soon workers in cities across the country participated.

After several days of violent clashes between strikers and police, President Grover Cleveland deployed the army to quell the uprising. This only intensified tensions, and on September 5th, a bomb was detonated at a rally in Chicago's Haymarket Square, killing seven policemen. In response, Cleveland and Congress rushed through legislation outlawing all labor unions.

It wasn't until after Cleveland was out of office that things began to change. In 1894, New York City held the first-ever Labor Day parade. And in 1896, President Grover Cleveland signed a bill making it an official national holiday. Why? Some say it was an attempt to appease angry workers following the Pullman Strike and Haymarket bombing. Others say it simply acknowledged workers' important role in society. Either way, we can all agree that it's become a tradition.

So What does this Mean for Us Today?

In modern times, we tend not to think about how difficult life was for workers in the late 19th century. We take things like weekends, paid vacations, and sick days for granted. We expect to be paid a fair wage for our work, and we have laws to protect us from discrimination and sexual harassment. But it wasn't always this way—and we have labor unions to thank for it.

While the labor unions have done a lot to transform workers' rights, we must acknowledge that there is still much more work to do - especially for marginalized workers. The COVID-19 pandemic only exacerbated these issues, leading to the introduction of the Protecting America’s Meatpacking Workers Act of 2021. The Senate bill sponsored by Senator Cory Booker and Rep. Ro Khanna seeks to "provide essential protections to meatpacking workers, including limiting line speed waivers and enhancing protection from retaliation for workers who speak up about conditions."

So this Labor Day, instead of firing up the grill and cracking open a cold one, take a moment to reflect on how far we've come as a country—and how much further we have yet to go. And if you're feeling ambitious, you can even join a union! After all, they're still fighting for our rights today—just like they did over 125 years ago.

More From the blog

5 Reasons to Implement Processes in Your Small Business

In light of the Covid-19 pandemic, businesses and entrepreneurs are faced with the choice to freeze in fear or adapt to the new normal. Tech-inclined organizations and companies have been using collaborative tools like Google Drive to facilitate online work for years.

How to balance being an entrepreneur and a mom without guilt or burnout.

The Solopreneurs Guide to Project Management

As a solopreneur, small business owner, or small organization, project management is one of the most challenging aspects to tackle. In this blog post, I want to share with you some tips about project management that have helped me over the past year or so since being in business for myself--tips that will apply whether you're an entrepreneur or not!